The Meet Group: Meet the (Match)Makers of Gamified Online Dating 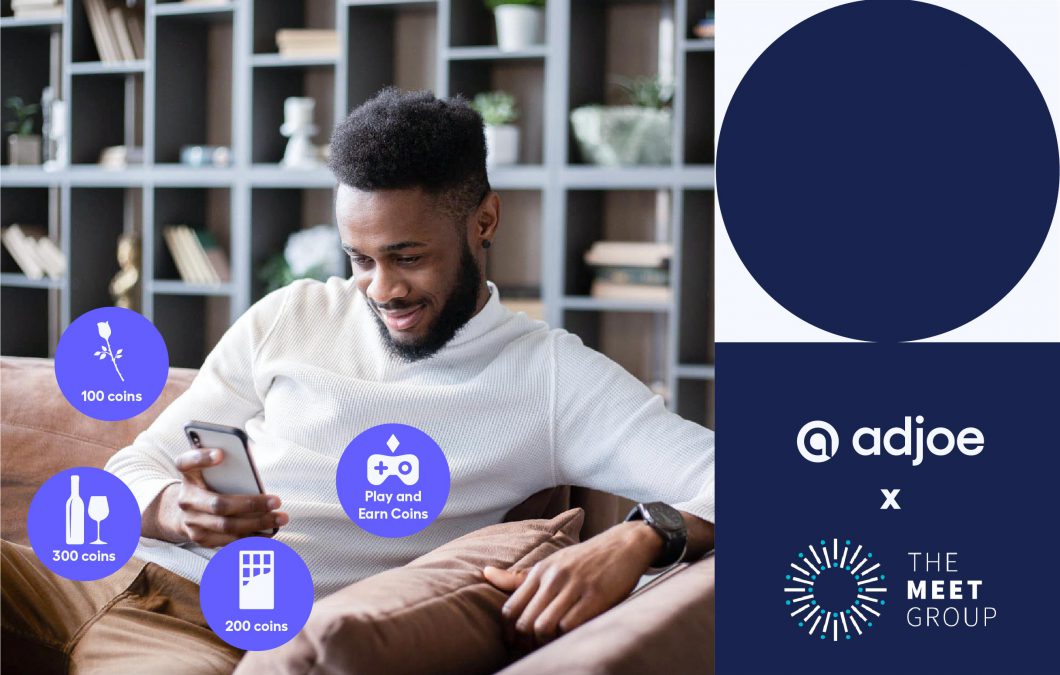 In a mobile-first era, a whole host of dating apps are fighting for screen time by seeking new and compelling ways of connecting singles. Matchmaking is now really only one part of the equation. To keep their users highly engaged, these apps need to offer far more than just the conventional dating experience. Even more so since the COVID-19 crisis, which has made us all realize that there is a real timeless need for human connection.

To meet this new demand, the original dating app vertical now often overlaps with social and entertainment apps. This is where The Meet Group comes in. The Group is adjoe’s partner and a leading provider of livestreaming and creator economy solutions for a number of the world’s largest social apps. It aims to build the most engaging online dating and social communities in the world. How? By adding more dimensions to the dating experience, such as livestreaming, virtual gifting, rewards, and dating games – and adding more dimensions to its user engagement and app monetization strategy.

Who Is The Meet Group?

With millions of active users, The Meet Group’s story spans back to 2005 when it launched its first site, myYearbook – now MeetMe. The Group’s portfolio now encompasses high-grossing social dating apps such as Tagged, MeetMe, GROWLr, and Skout.

In 2020 The Meet Group was acquired by Parship to form the ParshipMeet Group. Their mission is to deliver high-quality human connection via its portfolio of brands ranging from social dating and entertainment to matchmaking. With this mission at the forefront of The Meet Group’s owned and operated apps, users can stream live videos, send virtual gifts, chat, and play interactive games with other singles.

A Victory with Video

In 2017 The Meet Group added another dynamic dimension to its dating experience: a livestreaming video feature. The Meet Group was the first large Western dating app company to make the big leap toward video … and you’d better believe that it paid off.

Streaming singles found instant connection and community. The Meet Group’s video service entices their live community to spend over one billion minutes in video per month and broadcast about 200,000 hours per day.

And it didn’t stop there. The Group’s social dating apps, MeetMe, Tagged, Skout, and GROWLr then added yet another feature to their romantic repertoire. Besides enjoying close connections via livestream, singles are now able to purchase virtual gifts to “tip” their streaming hosts in return for their attention. The creators receiving these virtual gifts can earn real money from the gifts.

A Model of Matchmatching and Monetizing

But it’s about more than just fun and games. It’s also about monetization.

Within the mobile landscape, apps with livestreaming as a prominent feature currently accounts for an astronomical 75 percent of consumer spend in the top-25 social apps worldwide. The Meet Group now monetizes all of its apps through the love language of virtual gifting and livestreaming. In fact, after incorporating this app monetization mechanism, The Meet Group saw its annualized video revenue exceed an impressive 70 million US dollars. This was within just 15 months of launching the feature.

Shortly after these in-app purchases in the form of virtual gifts became one of The Meet Group’s biggest revenue drivers, the Group leveraged this trend with an advertising solution to diversify its revenue streams. The Group opted for rewarded advertising to reach (and monetize) a whole new group of users who prefer not to pay for virtual gifts in real currency.

Playtime: An Engagement Loop of Livestreams and Love

The Meet Group started to successfully monetize its nonpaying gifters through adjoe’s unique time-based rewards platform, Playtime. This now allows the Group to generate even more revenue on top of in-app purchases without cannibalizing its existing revenue streams. By giving singles the chance to earn its in-app currency, the Group can now drive them into the gift-giving game.

Drastically different from other ad formats and offerwalls, adjoe’s Playtime gifts The Meet Group’s users a compelling experience to complement the fun they have while on the dating app.

What’s Next for The Meet Group?

Unlike other dating apps out there, The Meet Group doesn’t design apps to be deleted. It builds a dating community that builds lasting online connection. The Group, now part of ParshipMeet Group, is still planning to cause more disruption to the dating app landscape.

Data.ai has reported an impressive uplift in the average megabytes per user among the highest-grossing social dating apps worldwide over the past year, including MeetMe. This speaks volumes about the demand for making the dating experience immersive, through livestreams and gaming. In the words of The Meet Group’s CEO Geoff Cook, the Group hopes to move away from a “lean-back consumption of content” and more toward a “lean-forward dating experience.”

Users Deserve to Be Rewarded