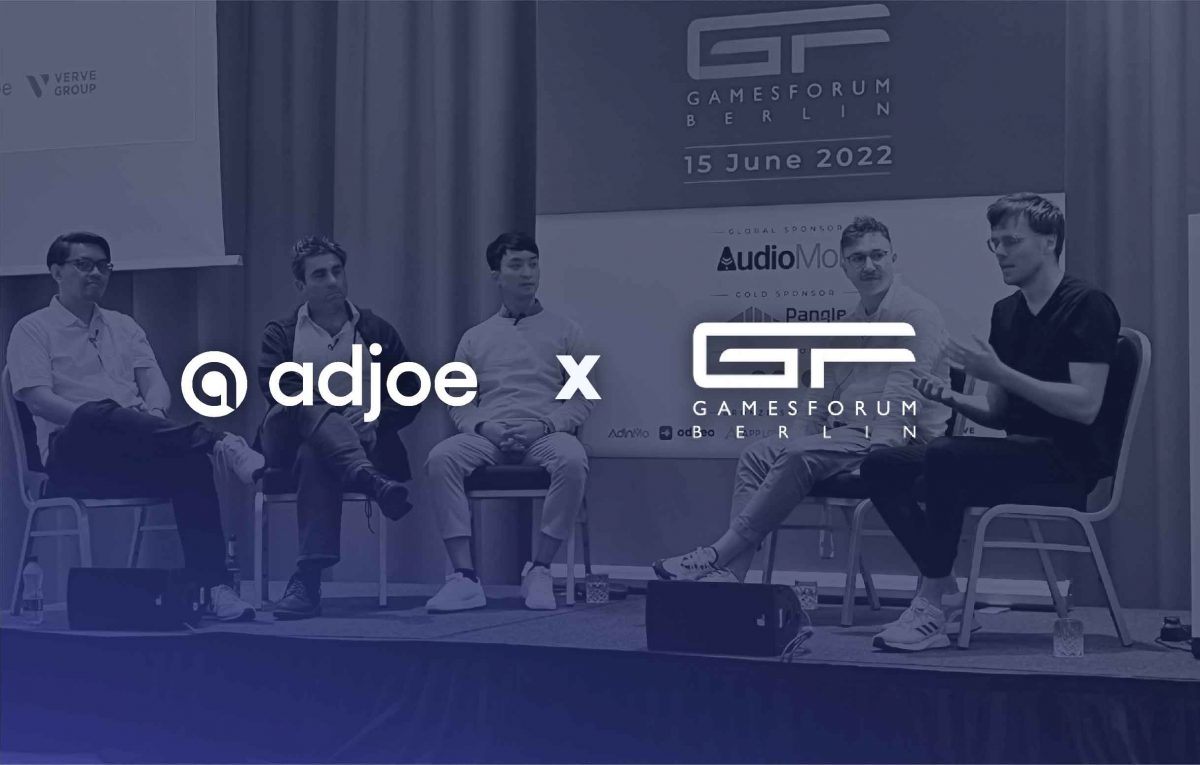 From piling on innovation pressure to imagining progress with transparency within bidding models. Last month, adjoe attended Gamesforum Berlin to discuss with other industry experts the landscape of new ad formats and revenue incrementality in the future of mobile advertising.

Panel participants – besides adjoe Managing Director Jonas Thiemann – included Kiko Untalan from Digital Turbine, Kristan Rivers from AdInMo, Kalok Chan from Verve Group, and Andrei Luzan from Mamboo Games. As they looked beyond lucrativeness to user-friendly and game-changing concepts in mobile advertising, the panelists considered how they imagine the mobile gaming landscape to play out.

1. The Pressure to Innovate

From dropping eCPMs to a more difficult UA landscape to navigate following Apple’s privacy changes. The panelists were united in their belief that executing the standard is no longer enough. But in the future of mobile advertising, should we look to innovation or intense optimization? As Thiemann suggests, it might have to be both. There could well be a call to look at in-house products to really maximize and leverage the performance of existing formats – such as rewarded video and video interstitial – that are still performing well.

But, naturally, innovation has to be part of the future equation, too. This prompted many questions about the state of mobile advertising: Should we reimagine a future of mobile advertising where ad monetization can be more than “sticking rectangles or audio in games?” That is, more than interstitials and banner ads. Will new formats such as audio ads, Playtime, or rewarded interstitials be enough or should the industry venture beyond these to create even greater value for the app user?

Invention is the product of necessity. With all the Google and Apple privacy changes (we’re talking LAT and IDFA), publishers and advertisers need to invent and find new ways to be transparent with their app users. These requirements force the hand of change – from viewing ads as purely a revenue mechanism to a product enhancement mechanism.

When we talk about new formats in the future of mobile advertising, the panel agreed that everybody – users, publishers, and advertisers – needs to profit in the long run for any new formats to perform well. For users to profit will depend on the way an ad is integrated into a game or app – and they should be educated about how ad formats can provide a better in-app experience.

The panelists toyed with the possibility of completely removing some negatively perceived in-game ads with ads that are more naturally integrated into the game economy. But Thiemann and Luzan both argued that it’s not that all ads are bad – ad diversity and relevance are crucial. Not only that – the industry still needs to overcome frictions with the current shifts in privacy to achieve optimal ad personalization.

And then, speaking of transparency, the panel naturally also moved on to discuss transparency within bidding models and the urgent call for a more even playing field.

Verve Group’s Chan spoke out about the industry’s need to close the gap between the other side of programmatic – on real-time bidding and ad exchanges – and ad networks in terms of transparency. He called it “a lost opportunity.” And according to Thiemann, if publishers united to become more aggressive in their fight for transparency, the future of mobile advertising may look different for them and for ad networks. It would signal a major step if ad networks would start sharing the winning bid and losing bid to eliminate bias.

While ideas and imaginations of the future of mobile advertising were flooding in at Gamesforum Berlin, everyone on the panel agreed that these changes won’t happen overnight. The revenue from these new ideas also won’t flood in overnight. But sometimes, adding something truly new can bring an uplift of 20 to 30 percent. These ideas, along with your main monetization stack, will require constant optimization.

Thought leaders will be honing in on the sweet spot between what is better for monetization and what is better for the user. Thiemann believes that demand follows supply and supply follows the product. If you create a new competitive ad product, you will find publishers to use it – and advertisers will follow the traffic.

And while panel discussions in Berlin centered around

adjoe is looking forward to more discussions about game-changing trends in the app economy at Gamesforum London on September 15. Stay tuned!

Your New Ad Unit Has Arrived