Meet Corvin: How Do You Switch from Frontend to Backend? 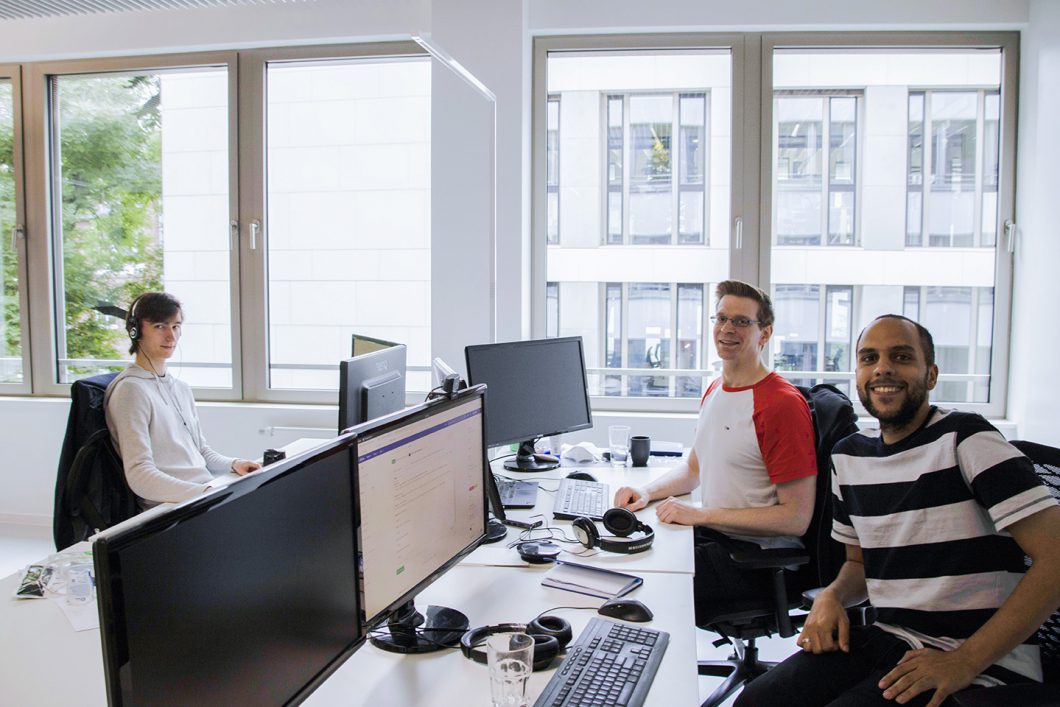 Meet Corvin Grigutsch, a full-stack developer and an adjoe original – one of the first hires as a mobile developer intern back in 2014. He worked directly with mentor Co-Founder and CTO Carlo Szelinsky to develop adjoe’s Playtime SDK.

After graduating in Computer Science and Mathematics from the University of Göttingen, Corvin switched his focus to the adjoe’s backend development. This came after seven years of part-time work in frontend Android development at adjoe. Keen to move forward in a data science role and expand his universal development skills, the developer made it his mission to master the backend system. For example, by working with Go language, gRPC, and Protobuf.

Developing the SDK from the Ground Up

As part of adjoe’s Frontend Development team, Corvin and his colleagues had to design an SDK from the ground up that was as easy as possible for publishers to integrate into their app’s Android development framework. Easy, how? Here are three examples.

Corvin and his colleagues assisted adjoe’s Supply team in directly interacting with and onboarding hundreds of new partners – and, worked together with Carlo to guide partners through the installation process.

Navigating Android Limitations in the SDK

Developing the Playtime SDK from the ground up meant realizing different tasks, such as:

These tasks were not without their challenges. For example, Corvin and the Tech team needed to ensure all wrappers were compatible with the libraries they used as well as Android API versions 16 and above. But the largest obstacle was the background execution limitations imposed by Android. Android’s restrictive frameworks, designed to extend battery life, posed complications for usage tracking implementation.

But where there’s a will, there’s an API. Corvin used combinations of Android’s APIs for background work, such as services, the AlarmManager, and the JobScheduler to overcome these restrictions.

Getting to Grips with Go, gRPC, and Protobuf

Working in adjoe’s frontend is no easy ride, but the backend system was completely new territory for Corvin. The full-stack developer had to familiarize himself with:

With the assistance of mentor Seb Jakobs, adjoe’s Tech Lead – as well as Go Playground and Go Tour – Corvin mastered Go within a few weeks. He started by learning about types, structs, and interfaces before moving onto more advanced topics like channels and Goroutines.

Switching from JSON to Protobuf

One of Corvin’s first projects with his team in the backend has also been to help handle traffic that is 100 times higher than Playtime traffic. To enable this traffic increase and facilitate users making more requests, Corvin performed a switch from JSON to Protobuf as the main message protocol to save bandwidth and increase performance. As binary and field names are not included in the message, this makes the message size smaller relative to JSON. This message protocol is already in place for new projects at adjoe.

So, let’s take you through how Corvin handles a request to create a user.

First, you need to create a user with an HTTP server that accepts a JSON request.

To create a Protobuf message, you first define the schema.

Then, you define the service.

You can use Buf, for example, to create the Go client for the gRPC service. After this, you can create the server in Go.

After this step, you then implement the server.

You can subsequently run the application and make a request to the server – for example, with Kreya.

And there you have it: This is the complete code.

Now, within this code, Corvin has managed to create a user in Protobuf and subsequently reduced bandwidth. The JSON request is 109 bytes, whereas the size of the Protobuf message is only 42 bytes.

Fresh out of School to Full-Time Full-Stack Developer

Only a couple of Corvin’s colleagues at adjoe have made the leap from frontend to backend development. But knowing the necessary languages and technologies used in both the frontend and the backend gives these developers a completely holistic view of company projects. Corvin knows exactly where data comes from and where it is created (for example, the usage in the frontend) as well as where the data goes and where it is consumed (to which table it is written and which checks it has to pass).

In 2021 the full-stack developer rose to the challenge of learning these backend technologies and languages from scratch. But his next task is already in the pipeline: Corvin will focus on analyzing the bids and optimizing the bidder. This will help improve ad recommendations for adjoe’s users and boost the company’s business.

Apply For this job
As an Associate Product Manager, you are ready to skyrocket your career in tech! You will be in charge of transforming our business requirements into new features from day 1 and successively gain new skills to grow you towards your next milestone: leading your own team of developers and owning our product strategy as a product lead.
adjoe is a leading mobile platform developing cutting-edge advertising and monetization solutions that take our app partners’ business to the next level.
Our unique ad unit “Playtime” has made us one of the fastest-growing ad platforms and top-ranking user acquisition sources for app publishers worldwide. And that’s just the start. Our vision is to serve a positive ad experience to every app user on the globe. To achieve that, we challenge the status quo by creating industry-changing technologies, ad formats, and business models.
As part of the Applike Group (financially backed by media powerhouse Bertelsmann), adjoe has access to an extensive network of industry experts and funding with a long-term growth mindset. Our advanced tech stack and modern cloud technologies (learn more here) allow us to handle billions of ad requests per day and are the foundation for our competitive advantage.
We aim to reshape the way apps operate their business. If you thrive in a tech-driven, fast-paced, and creative environment then join our ambitious team in achieving our vision!

What you will do:

Why you will love working here:

Skip writing cover letters. Tell us about your most passionate personal project, your desired salary and your earliest possible start date. We are looking forward to your application!
We celebrate diversity and are committed to equal employment opportunity regardless of race, color, ancestry, religion, sex, national origin, sexual orientation, age, citizenship, marital status, disability, gender identity or Veteran status.
Apply For this job

Move From Latest Hire to High-Flyer